Walking on footpaths in France 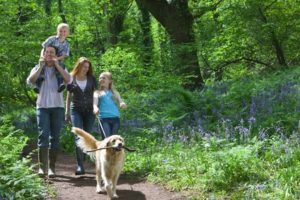 Please tell us about footpaths and rights of way in France

In recent years the footpath layout and signing has advanced rapidly, with every départment almost without exception investing heavily in signing guided footpaths through the countryside for both walkers and off road (VTT – Vélos Toutes Terrains) cyclists.

Off road paths are organised into four types, each with different colour code markings:

Grands Randonées (GR) are long distance routes, such as the GR65, one of the Routes de Saint Jacques de Compostela. These are ancient pilgrim routes which lead south through France and along the northern coast of Spain: In the area covered by Halcyon Leisure, the GR65 runs through Rocamadour, Cahors, Montcuq, Lauzerte and Moissac. You will often see this way informally marked with scallop shells in a variety of guises in addition to the official White and Red marking.

Grand Randonées Pays (GRP) are long distance circular routes around an area or region, and these will be marked with Red and Yellow marks

Promenades et Randonées (PR) are short distance local walks, and usually circular. They will be marked with Yellow only.

Sentiers Equestre – Similar to a bridleway, these routes are recommended for horse riders, and will have orange marks.

Blue marks are used for local unregistered routes. There are other marks for diversions, and special marks for Cycle (VTT) routes

You will find the route marks around head height on posts, trees or anything convenient. 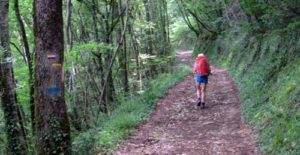 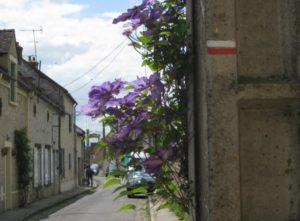 There are THREE BASIC MARKS which will be found on trees, posts or anything else prominent along the route

STRAIGHT ON  – Horizontal line
TURN – Vertical line, and horizontal arrow showing which way to turn
WRONG WAY – An X – Turn back – These are usually on the first convenient upright around 30-50m after the deviation in the route. 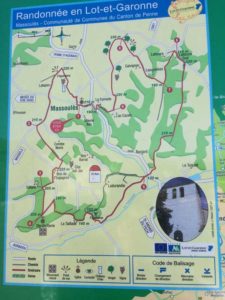 In many areas you will come across signs like this which show recommended marked routes, and these routes are also readily available on the internet to download to portable devices so you do not need to carry maps.

There will be information on distance, difficulty and also the signage employed for this route. Viewpoints and points of interest are also marked.

Most of these registered routes have been agreed legally with landowners and access is no problem provided you keep your eyes open and follow the signs.

For more information on ‘Green Lanes’ and other off road routes, please see this excellent article on Connexions France